For years the Davis’ have created a creepy crawly yard haunt that has attracted people from all over the Portland area.  2015 celebrates the 16th  anniversary of the yard display —  located at the corner of Johnson Creek Boulevard and 43rd exhibits 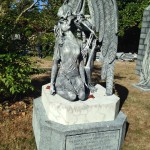 This year’s yard display, which is mentioned in the Chiller documentary, American Scream, features a new mausoleum, several monuments, one of those being the award winning “Kiss of Dea 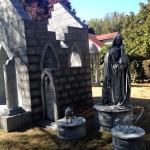 th”. We have added a few new monuments including a new urn monument, two new pillar demons, and more new amusing tombstones.
The display is available for viewing daily with lights coming on at dusk until 10pm Monday-Thursday.  The effects (sound, video, fog, and animations) come on Friday-Sunday from dusk until 11pm and 10pm on Sunday.

Located at:
8703 SE 43rd Ave
Milwaukie, OR 97222
Directions
Free Halloween display viewed from fence only
(please be respectful of the neighborhood when parking)
See Calendar for best viewing times